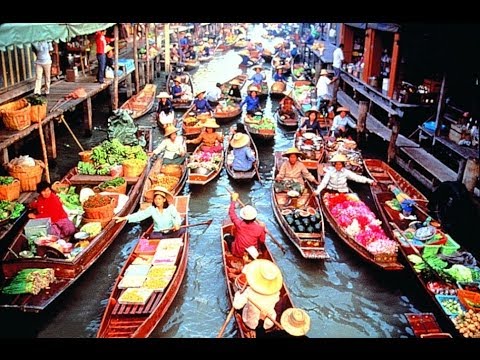 Welcome to the Kingdom of Thailand and Bangkok its capital city. Bangkok has the largest population (with one in every nine Thai people living here), the world’s largest name (in Thai), and is the largest city in the country (with fifty districts to explore). Bangkok in particular is known for its strange laws (like stepping on Thai currency will automatically land you in jail), cheap pricing on food, and its beautiful scenery. It’s also one of the most dangerous cities in the world, but you’ll be fine as long as you remain vigilant and take your time moving about the city (scammers and thieves look for folks who are in a hurry).

Located in the Rattanakosin District, the Grand Palace rests on the banks of the Chao Phraya River. The palace is really a compound or collection of building, courtyards, and sacred sites surrounded by a huge wall. Many of the structures date back to 1782. Keep in mind that this is not only a government building, but a religious one as well—be sure to observe local customs like dress codes. No short pants, shirts without sleeves, or bare feet (unless it’s a temple then guests have to remove their shoes). Photography is allowed except in temples. Also be sure to watch out for scammers at this attraction. There are lots of openings that look like they could be the main entrance and plenty of thieves who are glad to tell you that it is for a fee.

If you’re the type for some high intensity entertainment then the fights might be the place for you. Bangkok is full of boxing stadiums, but the biggest and most exciting fights are held in Lumpini or Ratchadamnoen stadiums.  Be sure to get in your seats early! Boxing may be the main event, but the pre-show rituals are not to be missed. “Wai Khru” is a ritual done at the beginning of the night so that they fighters may respect their trainers and “Ram Muay” is a chance for the fighters to show off their physical prowess before the fight begins. Because everything is cheap in Bangkok, the fights are real affordable by western standards.