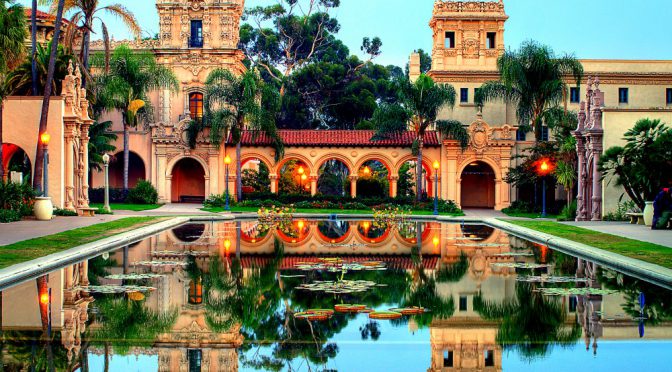 In our last California post, we introduced our members to the majestic Coronado Island, the decadent Gaslamp District, and the renowned San Diego Zoo. But there’s much more fun to be had than just those. San Diego is mecca for those looking to step outside their comfort zone and experience what this coastal paradise has to offer.

If you don’t have fun at Balboa Park, then you weren’t trying hard enough. This park is packed with activity. There are seventeen museums to choose from, all of which cover a variety of subject matter including the history of locomotion, old master craftsmen, all branches of the arts, cultural exhibits, and San Diego history.

When you’ve had enough of the museums head further into the park and check out some iconic San Diego landmarks—the park has twelve of them, including the park’s founder’s home which you can tour. Once you’re feeling hungry, stroll down the Esplanade and visit one of the dozens of eateries in the park. February through September you might even get to have your lunch on the park if you visit the International House for their daily sampling of international fare.

Say hello to the world’s oldest and active sailing ship. Have you ever wanted to stand on the stern of a creaky deck and look out at the great wide ocean with a sense of adventure in your heart? Here’s your chance. The Star of India was built in a shipyard in the Isle of Man in 1863 (see the link for our feature on this Irish island here http://blog.mysouthernjourneys.com/featured-locale-isle-of-man/).

The ship has had quite an interesting history since her first launch. She has run aground in Hawaii following a storm. By 1871 she had made twenty-one circumnavigations as a trade ship from Chili. She often would ferry emigrants from England, Ireland, and Wales to colonies in New Zealand. The Star even once suffered a mutiny and a tropical cyclone at the same time, after which her Captain died and was buried at sea. Even after she became an “Americanized ship” after being sold in November of 1966 to Congress, she still had quite an interesting career including being trapped in ice off the coast of Alaska.

Today she lives a quieter life, sailed by a volunteer crew, and welcoming guests from far and wide to take sail and chase the horizon.  It’s $18 to visit the ship. Check out their website for more details: https://sdmaritime.org/.